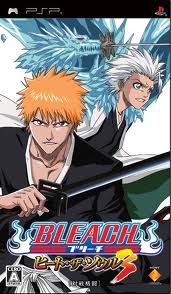 The Bleach: Heat the Soul; (BLEACH:???ï¿½?ï¿½????) series is a series of 3-D cel-shaded fighting games for the PSP based on the popular manga and anime series Bleach by Tite Kubo. Each installment is developed by Eighting and published by SCEI. All installments have been released only in Japan. Each installment has several methods of play, with different types of game modes. New games have introduced additional modes that usually carry over to the sequels. Using characters taken directly from Bleach manga,[1] the player uses each character’s unique abilities to battle and defeat an opponent.