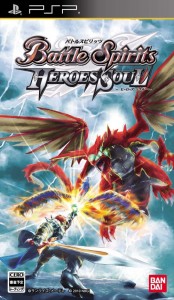 Japan NBGI Company production, distribution, exclusively by the PSP handheld. Adapted from the popular comic “Battle Spirits” (Chinese translation of “battle of the soul” or “war spirit”), a card Game of new work: “the fighting spirit: Hero Soul” (Battle Spirits: Hero’s Soul), has NBGI has formally identified this for the spring 2010 meeting with the players, this is the series in the second paragraph on the PSP platform, original works. At present for the official site have also been opened, and put the game more than the latest picture for you player information.